As you know Oppo launches its latest ColorOS skin every year. So you’re looking for the upcoming ColorOS 8 update based on Android 11, Then you’ve come to the right place. Here’s you will find all the information about the ColorOS 8 release date, features, eligible devices, and rumors.

Oppo unveiled its new custom user interface ColorOS 7 in December 2019, that based on Android 10.  Oppo has rolled out ColoroS 7 update for few devices including Find X,  Reno Series,  F11 Series,  F9 Series, and some other devices, the company is yet to roll out ColorOS 7 update for about remaining smartphones which is supposed to happen in upcoming months.

The mobile operating system update and improvement is the major part of it, and always some space for improvement. the next version of ColorOS– ColorOS 8 could become a milestone for this improvement story.

Currently, there is no official confirmation about the name of the next OS version but it will probably be called ColorOS 8. We expect the COlorOS 8 will be announced very soon, which will be based on Android 11.

Note -This list may be changed in the coming times. 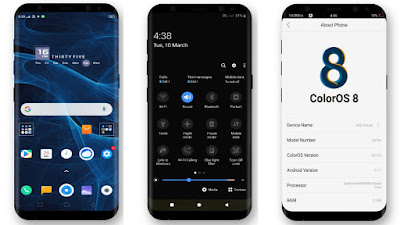 Google has also tweaked the pop-up that appears when you capture a screenshot and it is now much smaller and similar to what is seen on iOS devices. Instead of a large pop-up at the top of the screen, the Android 11 shows a smaller version of the screenshot that you took at the bottom-left of the screen. It is accompanied by options to dismiss the notification, share the screenshot, and to edit it.

Have you ever swiped away a notification and then found yourself trying to remember what it was? Well thanks to the neat new shortcut in your notification shade, you can just swipe down and get right into your entire notification history with just a few button presses.

3. DOUBLE-CLICK ON THE BACK

The new gesture feature does not require any special hardware to work, using sensor data from the device’s accelerometer and gyroscope to determine if the user double-clicked on the back of the device. These double-tap gestures have a “door” to prevent them from starting in certain situations.

Google has been consistently trying to fix the app permissions in the last few versions of Android and that work is continuing with Android 11 as well. The company has added a new option in the Android 11 that will revoke an app’s permission if the app is not used for a few months. This should help unsuspecting users from getting their data drained by a malicious app.

Most children today have smartphones. Google has many apps in its app store for children. In the future, this will not only be related to the selection and use time of the application but also to the lock screen of the smartphone.

The current version of the Google Play services code indicates a second lock screen for Android 11. We are talking about the “second lock screen”, which is only available under Android R (Android 11) and mentions “kids” in multiple places.

Here’s another great little feature that you probably wouldn’t even notice if not pointed out. In the Android 11, you can now pin up to four applications to the default share menu. This makes it far easier to send to contacts or apps when you use them frequently.

Android 11 also adds a new option to the hotspot and tethering menu in the form of Ethernet tethering. This will essentially allow people to connect a USB-to-Ethernet adapter to their Android phones and then connect the LAN cable to that adapter and their PC to use the Internet from their phone. This is a niche feature but will certainly be helpful when you are trying to use the Internet on a desktop that doesn’t have Wi-Fi support.

Android 11 has stolen a feature from Gmail that allows you to mark notifications as ‘important.’ To do so you can just long-press on a message in the Conversations section within the notification shade and this will give you a new UI for you to tag or tweak.

Thanks to the Android 11  you’ll now be able to get further control over “silent” notifications, as the new option within the Settings menu allows you to “Hide silent notifications from the status bar.” When enabled, this removes the icons from your status bar, tidying up the entire experience — making them truly silent.

It wouldn’t be another Android 11 without having some UI tweaks and the notification share is not safe this time. The new-look isn’t particularly endearing at first, with wider spaces between each notification section and plenty of clear sections.

Motion Sense is often chastised for being a gimmick but Google has added a great new gesture that means you can pause and play music by “air-tapping” above the display. This feature is, obviously, not available on older models without having the Soli tech packed inside.